While Network Cloud’s impact is revolutionary – its deployment is evolutionary. It is architected to migrate service providers to cloud-based networking without disrupting existing performance metrics and without compromising on feature completeness. This is achieved through three mechanisms:

Service provider networks have been growing exponentially over the last decade to meet the unprecedented demands of digital workflows and lifestyles, with network capacities growing by 20-40% a year. Network Cloud addresses growth traffic first. Within a couple of years, existing traffic constitutes only half of overall capacity, while new traffic on the network cloud constitutes the other half and growing. 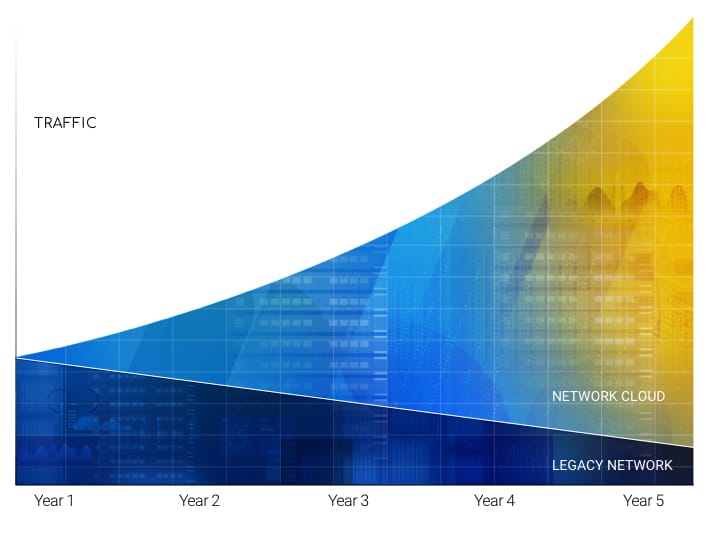 Covers all your protocols

Modern networks display an extreme case of the Pareto principle in action: a handful of services (such as online video) account for the vast majority of traffic. At the same time, legacy services still run on CSP networks and must be delivered with carrier-grade reliability. These often rely on specialized network protocols and constitute a very small amount of traffic. The need to address both categories of services is one of the reasons existing OEM routers are often bloated with a massive number of features.
Network Cloud, built from scratch as a modern, lean routing infrastructure:

Scale up when you’re ready

A key to the migration process is the ability to upgrade and expand network capabilities without disruption to the flow of traffic.
Network Cloud’s disaggregated architecture: