Last week, DriveNets participated in the Open Compute Project (OCP) virtual summit. Like many events affected by the COVID-19 pandemic, the OCP global summit, originally scheduled for March 2020 in San Jose, was held virtually. Virtual conferences and summits have become quite popular this year and we expect to see more of them in the future.

DriveNets at the OCP Summit

In the last OCP regional summit, AT&T presented the Distributed Disaggregated Chassis (DDC) architecture, based on the following principles:

On that day, DriveNets announced that its Network Cloud software was the first to support the DDC model. This year’s OCP summit was going to be groundbreaking for us. We were going to present live in the OCP experience center the first high scale disaggregated router based on the DDC architecture. We partnered with two OCP members: UfiSpace – who supplied the white boxes for the demo and Credo, who supplied the 400G Active Electrical Cables (AEC) connecting the white boxes. The AEC technology is for another blog, but for the purposes of this blog it suffices to say that AEC reduces significantly the cost and power consumption of the interconnect cables in the disaggregated solution. 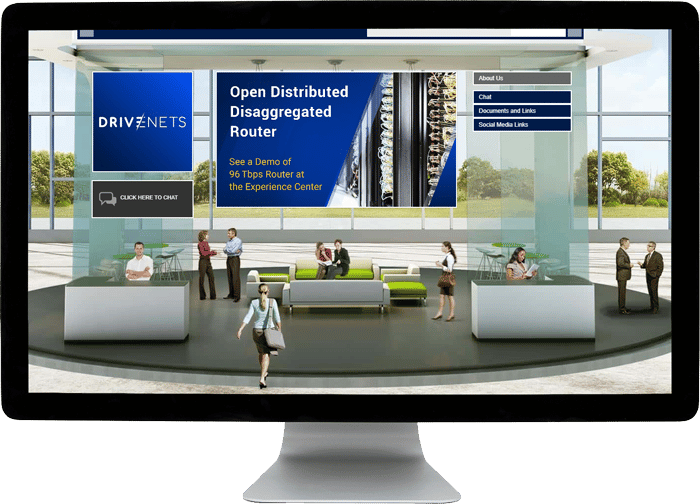 DriveNets’ Network Cloud Solution can scale up to 192 Tbps. However, due to space and power limitations at the OCP experience center, we decided to build a medium size router of 96 Tbps with 24 Network Cloud Packet Forwarders (NCP – the equivalent of a line card) and 7 fabric elements (NCF), all white boxes. We built the router at Credo’s offices only 2 km away from the convention center and even connected it to an Ixia traffic generator.

Because the summit was canceled at the last minute and transformed into a virtual conference, having already built the router, we adapted, and rather than moving it to the OCP venue, we video recorded our engineers describing the solution and demonstrating it for the virtual experience center.

The first video is an overview of the disaggregated router presented by DriveNets and its two demo partners:

The second video is a demo of our working disaggregated router:

High-scale DDC-based Router is Ready to Use

Many Service and Cloud Providers ask us if the DDC architecture is ready for use and if the disaggregated architecture can really scale. This demo proves just how ready it is and how far it can scale. Our medium size router with 960 ports of 100 Gbps is only half the size of our large router. How many high-end chassis-based solutions existing today support this? None. They are all limited by the physical size of the chassis with 16-18 line card slots, each with 36-48 ports, a maximum of 600-800 ports. The disaggregated model today supports up to 48 NCPs (line card equivalent). That’s 1,920 x 100 Gpbs ports!

Virtual events are excellent for updating the market about your products and receiving updates on new trends. In fact, they have many other benefits. However, the human touch, that face-to-face interaction between vendor and customer, remains a challenge for them. At DriveNets, we managed to adapt our participation in the summit to this new medium, and we are now examining its effectiveness in order to improve in future events. But there’s no denying that a major bonus of virtual events is that there is no need to dismantle the booths when the summit ends. Although the summit has ended, our virtual booth will remain available online for a year, until the next summit.

Disaggregation in Networking: The Second Wave