The old rule of a “single service router” typifies much of today’s network architecture. This means that each service, whether a mobile backhaul, provider edge, business service, internet peering or core network, is tightly coupled with its own batch of dedicated chassis-based routers, for connectivity.

While the inefficiency of this model may seem obvious, nevertheless, already for years, network vendors have perpetuated this approach and service providers have tagged along for the ride.

The inherent inefficiency of the classic chassis

The classic chassis, which was, and still is, the basis for most networking functions. It is built in a manner that runs with inherently inefficient resource utilization, and therefore a sub-optimal CapEx and OpEx structure.

Such chassis are based on a fixed set of resources of different types:

When using the platform in a specific network scenario, the inherent inefficiency of the monolithic architecture means that the chassis goes under-utilized, for at least one of the resources mentioned previously.

This is because most networking functions require a different set of resources, which is usually a mixture of 1 or 2 intensely used resources and other, lesser used resources.

For instance, a core function (e.g., P router) requires intense bandwidth resources as it predominantly deals with packet forwarding and label switching (no requirements for routing, access lists and QoS). For this function, x86, TCAM and QoS resources will hardly be used.

On the other hand, an edge router, in the same network, will require more x86 and TCAM resources but not that many bandwidth resources, as it addresses lower capacity streams that only need specific forwarding, access lists etc.

The drawing below illustrates the resource requirements for a few typical networking functions and services, highlighting the difference in the mix of requirements that lead to under-utilization of resources for any networking scenario. This means that there are wasted resources in almost any monolithic router deployment in any specific network scenario. Those resources are a major part of the router cost-structure. The outcome is that operators pay for hardware resources they do not use, regardless of network growth trajectory. 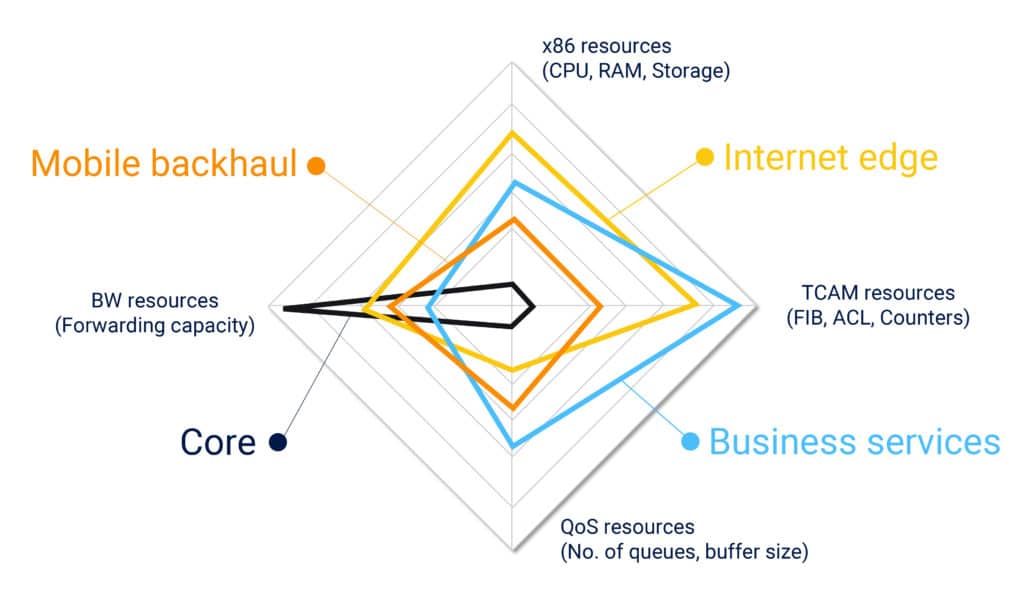 In practice, this inefficiency starts from day one of launching the network, peaking upon the exhaustion of intensely used resources in a monolithic chassis. At that point, the chassis is blocked, even though there is still an abundance of unused resources (the lesser used resources in that specific networking scenario).

As the network grows, the consumption of these favored resources also grows, further intensifying the abuse of unused resources. With more networking scenarios being addressed, this inefficiency eventually expands to all hardware resource types, significantly draining operator investments, while not yielding any benefit. In other words, wasted money.